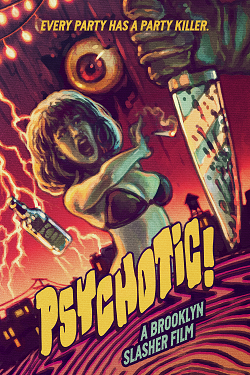 Drugs, hipsters, lousy paying jobs and expensive rents; is not easy to be an artist on Brooklyn. To make matters worse, there is a killer lurking the streets known as the Bushwick Party Killer. This is the setting of «PSYCHOTIC! the new film directed by Derek Gibbons and Maxwell Frey.

This film clearly has love for the Giallo genre and the 80’s slasher films, and I am sure that fans of those genres are going to like this movie a lot. I dare to even say that this could become a cult film, however, I had some issues with it. Mostly the acting, which varies from «not that good» to really bad, (as in «Not even funny» bad) I honestly wondered at times if the creators were trying to go full parody mode or not… Just to be clear, I am not talking about the titular killer’s design, which while it might look weird and silly, I dug it.

Another issue that I had was that most of the characters were horrible persons and annoying, something that you normally like in the slasher movies, specially when those characters get killed really fast (or when you can have fun trying to guess the order in which they will bite the dust), but here we have to wait A LOT for the murders to happen after a very good kill in the opening of the film, if you like stoner humor you might not care, though, because there is plenty of that here!

And now let’s talk about some of the good things of the film… The Kills.

Even when the film seems to slow to a crawl in order to show us the second kill (it happens around 40 minutes in) the murder sets are very well done, nice effects and everything, in some case there is some comedy involved, and it works.

Another aspect that I loved, was the musical score done by Blazing Galaxies, I dug several of the themes and I am considering buying the soundtrack on Band Camp. Just to be clear, there are also some songs that are horrible, but THOSE are intentionally bad, ignore those, enjoy the others.

All in all, there many things that works very well on the film, (the jury is still out on the acting) but I don’t think I can recommend it to just anybody, still, If you like independent films (or just watch them to take notes, admit it) and have a soft spot for Slashers and Giallos, PSYCHOTIC! A Brooklyn Slasher might be right in your alley.

The movie is already available on several VOD services.