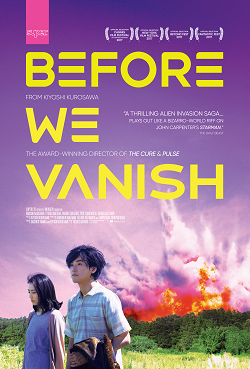 On a day like any other, after killing her family in a very gruesome way, a high school girl roams the streets with a grin on her face, not caring about the accidents she causes on her path. A talented illustrator gets called when her husband is found walking aimlessly on the streets in an almost amnesic state, and with close to no social skills to communicate. A reporter looking for clues about the murdered family gets shocked when a young man ask him to be his guide, and shares with him that humanity’s days are numbered, since he is part of a scouting party setting the stage for an alien invasion.

From the hand of Kiyoshi Kurosawa (director of «Cure», «Pulse» and «Doppelganger» among other films) comes «Before We Vanish» a Japanese drama film with tones of science fiction that makes us wonder if humanity should be allowed to continue on the planet for a little longer, or if it is time to be erased and replaced for another type of intelligent life form.

While the idea of a group of aliens taking the bodies of humans to learn about our civilization (and how to destroy us) is nothing that we haven’t see before, the different personalities of these visitors and their approach in order to analyze humans is what makes the film interesting and worth watching. Far from infiltrating high rank personnel and look for ways to destroy us with our own weapons, these invaders go around stealing «Concepts» from the minds of the people they meet in their daily lives, causing a severe change in the personalities of those persons, some even ending in a mental breakdown.

Coming from a society where the emotional bounds are almost non-existent, these explorers from outer space get each a very distinct and different reaction from what they are experiencing on Earth. For instance Akira, (the high school girl) hides beneath her innocent face a cold blooded entity that can kill without hesitation anyone that stands in her way; Amano looks like a young man, and expresses himself in a causal manner but shows a very mature personality that sees death as something unimportant, even his own. The third alien is Shinji, who has taken the body of Narumi’s husband (the illustrator), just when their marriage was going through a rough patch, and without noticing, he starts to develop a bond with her.

In contrast with other Kurosawa’s films, in «Before We Vanish» we don’t see a even tone on the story; although there are several moments of drama, there are others that seem like a parody of invasion films like «Invasion of the body snatchers». There are several very serious scenes that goes into deep moral reflexions, but then we get other scenes with musical themes that sound like a score composed by Danny Elfman that breaks what little tension the film managed to create. There are also some interesting action scenes but they are very far from each other and that can bother some people in the audience, specially because the film opens with a very strong scene, and from there there is a lot of dialogue and setting.

But despite of what it might appear, I don’t think this is a bad film, I just feel is too uneven. The film somehow works, but seems that it does not know what kind of genre or direction wants to take, and that also makes the run time (a little more of 2 hours) feels heavy with not a lot of pay off at the end.

The film has very few special effects, therefore the weight of the plot falls more on the acting, which I will say, was very good, I had no trouble believing the characters and I could easily understand their points of view. Also the photography and the camera work are strong points in the movie. Maybe if some 15 minutes were cut on the editing process the film had felt more solid, then again, that’s just me. I am a big fan of Japanese cinema, but sometimes, it can feel like they drag for no reason.

Directed by Kiyoshi Kurosawa and co-written with Sachiko Tanaka, «Before We Vanish» has Masami Nagasawa ( «I am Hero», «Gintama»), Ryuhei Matsuda («Nightmare Detective», «The Raid 2») Hiroki Hasegawa («Why Don’t You Play in Hell?», «Shin Godzilla») Mahiro Takasugi («Kamen Raider Gaim», the live action of «ReLife») and Yuri Tsunematsu («Sagrada Reset») in the cast.

«Before We Vanish» will be released on theaters on February 2nd, 2018.