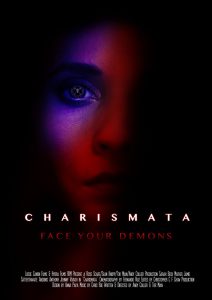 Following our remote coverage for the Cinepocalypse film festival, we got to see «Charismata» a disturbingly dark film from Tor Mian and Andy Collier.

In «Charismata» we meet a recently promoted police detective called Rebecca Faraday, that on top of dealing with a very bizarre murder on her first case (a possible satanistic serial killer, to boot) she has to battle with a hateful ex-husband, an addiction to pain killers, strange headaches and very tense working environment.

As more murders are discovered and clues pointing to a real state company start to surface, Rebecca and his partner Eli (With whom she clearly has a PROFESSIONAL love/hate relationship) meet a charismatic developer and business man called Michael Sweet, a man that actually seems excited to be a suspect on the case. Could it be that he knows more about the murders that he lets on, or is this just his weird way to get closer to Rebecca?

There were several things from this film that I liked and that stayed with me after the movie ended: the acting is very solid, both Sarah Beck Mather and Andonis Anthony deliver great performances and the chemistry between them as the detectives Rebecca and Eli makes the plot flow smoothly and keep us paying attention even when not much is going on. As the movie advances we can see how Rebecca starts to loose control on her emotions due to stress and develops an obsession with Sweet, but is it all just in her head or are there actually darker forces at work?

The story itself might be simple, but is so well executed that will keep us guessing until the end.

The film has an interesting mix of Detective thrillers with horror, but also has some comedy elements that work very well, this brings me to mention that the characters are very well written, even those who are not in the film for a long time. I liked several characters from the get go, specially someone we can call «The Shaman» (I am trying to keep the review spoiler free), but I also liked the guys at forensic department. Good performances all around.

It would be a sin to not to point out Jamie Satterthwaite’s performance as Michael Sweet, he was great every time he was on screen, although for the nature of the film it would be impossible to see his character on another story, it would love to see him in a similar role (maybe this time as a supernatural investigator?) he has a scene with the detectives at a interrogation room that is priceless. I won’t say more.

On the gore and blood department as you might guess, the film delivers, there are scenes that deserve to be paused to admire the details on the corpses, but never falls into bad taste or goes the easy shock.

The pace of the film was very good and steady, I can’t think of any scene that didn’t serve a purpose, and manages to do everything in less than a 100 minutes, it was a entertaining film overall, so make sure you see it when it gets released.

«Charismata» was written and directed by Tor Mian and Andy Collier, with the performances of Sarah Beck Mather, Jamie Satterthwaite, Andonis Anthony and more.

The Cinepocalypse Festival  had its debut year on Chicago from November 2nd thru 9th.