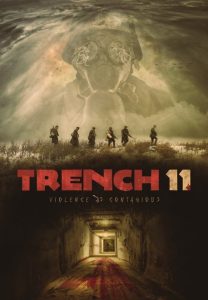 I really liked «Trench 11» a lot, and although the premise might sound too familiar, the writers Matt Booi and Leo Scherman did a good job to give the film its own voice, creating not only a very entertaining film, but also one that stands out from others with a similar story. Part of this I think was due that there are several characters that you could relate to, without falling into some emotional blackmail, so when bad things start to happen, you actually care for them, the funny part is that in some cases they are characters that you normally should not care for… I don’t want to say more due possible spoilers.

While some other characters don’t show much deepness, they don’t fall into simple cliches either, I found very interesting that although Dr Reiner is sort of the typical mad doctor, he had some very good lines and his speech almost makes sense. (Don’t worry, I said «Almost»)

This is not a typical horror film about infections (note I did not say «Zombies») it has very good pace, and although it has some jump scares, there were very few an in between, so it does not become annoying. While the film is not filled with gore and tons of blood, it has several cool scenes where the special effects are top notch, so I have no complaints there.

The film have several tense moments that work very well, combined with a music score that normally would feel out of place, mostly by being way to modern for the period that the film is set in, but nevertheless it works.

Cinepocalypse had its debut year on Chicago from November 2nd thru 9th.