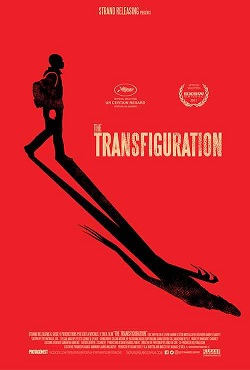 «The Transfiguration» has several interesting ideas, and at first it seemed like a coming of age story using the vampire lore as an analogy, and Milo’s obsession as a means to self discovery, unfortunately besides some strong moments, the film feels like it does not have a clear idea to where it wants to go, or that it knows what the ending is, but can’t quite figure how to get there.

The film starts strong with a very promising scene where Milo is drinking the blood from one of his victims in a public restroom (This is mistaken as a sexual encounter by another person) but after that, the story just goes on and on about Milo’s loneliness and I had trouble to stay focus on the film. Once Sophie enters into his life we can get a deeper look into Milo’s obsession, but the pacing stills feels very slow and it might frustrate some people, even when we get to see a couple of murders later on.

Milo is not a character that we can connect with that easily, behind that apparent indifference to the world, there is a person that has no problem hurting an innocent being, or even to cause the death of another person for no other reason besides morbid curiosity. Only in the end, mostly due his relationship with Sophie we see that Milo realizes about the seriousness of his actions, and decides to do something to fix it.

I didn’t have any issues with performance of Eric Ruffin as Milo, although at moments his apparent indifference seemed to me as autistic (I am still debating if Milo had that condition). Chloe Levine on the other hand, I believe is the one keeping the film’s momentum alive, specially when we see Milo and Sophie’s dynamic as as a couple, their relationship feels real, pure, and it really makes you hope that they manage to escape the world they are stuck in. As you might imagine, the film has several references to other vampire films, some very popular, others a little bit more obscure, but they are just there to confirm Milo’s obsession for the genre, and his search for the most «realistic» depiction of the vampire.

One of the things that bothered me on the film, was the use of the «Shaky cam», every time is used for long periods of time, or in several consecutive scenes it takes me out of the story, more so in this film, because I saw no need for its use, specially on still shots that were supposed to set the mood, and there were not a lot of action happening. There are not a lot of special effects on this movie, but the ones we see are very effective.

In conclusion: «The Transfiguration» is a drama with an interesting message, but you should not be expecting to see another version of George Romero’s «Martin». I personally liked the story and its conclusion, but the film has a slow pacing that might turn some people off, so see this film with that warning.

The film was directed and written by Michael O’Shea, who previously created the short «Milo» where a young man goes to meet an older fellow that he contacted via Internet, and of course there is a twist. I searched for the short in order to confirm that «The Transfiguration» continues that story, but I could not find it. In the cast we have the talents of Eric Ruffin, Chloe Levine and Arton Clifton with special appearances by Larry Fessenden, Lloyd Kaufman and James Lorinz.

«The Transfiguration» will be available on VOD starting August 8th, via Strand Releasing.