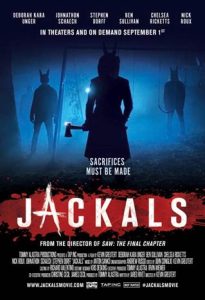 The story was set in the 1980’s, which I though was a smart move in order to get out the way the «I can’t contact no one on the Internet» or «I got no signal on my cell phone» cliches of the genre. The film’s premise, which is supposedly based on true events, is very interesting and never got boring since it had a steady fast pace, unfortunately, leaving aside the design of the cultist’s masks and attire, the film does not bring any elements that could separate it from other movies in the «Home Invasion» sub-genre, nor to make it memorable.

Despite that the characters try to sell the idea of a fractured family, we get no reasons to like them, nor why Justin should be with them instead of the cult, (of course there is the angle of the baby he recently had with Samantha, but that is too easy). All the members of the Powell family are the archetypes of the upper-class white family with first world problems, and with close to nothing to contribute to the plot, and even worse, there is one character that pretty much is there just to become a liability when the struggle gets more violent, completely panicking and later ending up as a hostage for the cultists. Besides Justin and Jimmy (my two favorite characters, by the way) the father character was the best written and even portrayed as a bad ass, sadly still does not pack enough punch.

And this brings me back to the cult members. At the end we know almost nothing of them, besides that they wear cool masks and that they are able to coordinate attacks without uttering a single word in the film. Through an opening sequence we can speculate that the members are mostly people that ran from their families and have no problem to execute them in a violent matter if the cult needs it. We never get an explanation about their motivations or what their vision is, which I think is a shame, because there was potential there for something bigger.

The film has several interesting action sequences, and it manages to create several tense moments (with a couple of jump scares here and there, no biggie). Despite having some violent scenes, the film never goes for the easy shock, nor the senseless gore, and I respect that. The issues I had with the film, however, was that for no apparent reason, several scenes were filmed with the dreaded «shaky cam» technique, something that always takes me out of the film.

The acting for the most part was better than good, I specially liked the performances by Ben Sullivan (Justin) and Stephen Dorff (Jimmy), what I found odd though, (and here is something I don’t consider a spoilers, since is something that anybody can guess, and is in the trailer!) is not that Dorff’s character does not last long on the screen, what bothered me was the way he was dealt with: for an experienced ex-military guy he sure falls into a very obvious trap. I guess it was a fast way for the writer to put the Powell family in a even worse disadvantage against the cultist, who by the way, would not last very long if the Powell s had some hunting rifles or shotguns… I mean, they are in a cabin in the woods, they are rich… But never went hunting?

In conclusion: «Jackals» is very entertaining, has several good moments and is worth your time, but never fully exploits the elements that could have set it apart from hundreds of other films dealing with home invasion. I would have like to know more about the cultist and I hope that if we ever get a second film, we get to see more of them and how big (or deep) is their power.