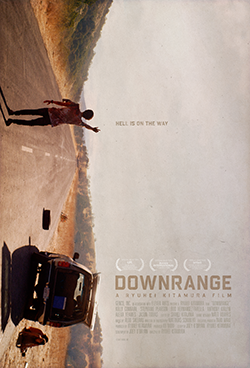 Recently screened at TIFF 2017 (Toronto International Film Festival), we saw «Downrange» the new film from director Ryûhei Kitamura who in the past brought us cult films like the bat-shit crazy «Versus», and the adaptation from Clive Barker’s tale «The Midnight Meat Train», both films known for their unrestrained, violent content…. And luckily, this film is no exception.

Official Synopsis
«Six college students are carpooling cross-country when one of their tires blows out on a desolate stretch of country road. Getting out to fix the flat, they quickly discover that this was no accident. The tire was shot out. With their vehicle incapacitated, the group is pinned down and mercilessly attacked by an unseen assailant as they desperately attempt to find a way to escape.

I liked «Downrange» A LOT, while the plot might sound too simple on paper, on the screen was truly terrifying. The film wasted no time introducing the characters nor forced the audience to watch for 30 minutes how they get along, using the same tired cliche individuals: In less than 15 minutes we get that most of them meet recently, decided to share a ride and suddenly their lives are in danger due a merciless sniper on a lonely road in the middle of nowhere.

Understanding very fast that the chances of being rescued or running away are slim to none, those who survived the first shooting start to use their wits and very limited resources to find a way out, unfortunately, every time they try a new idea and fail, it comes with a high cost. The pacing of the film is very good, and although we can argue that after the first half of the film there is a scene where the pace seems to drag, on the third act the film speeds up again, delivering a very frenetic and satisfying conclusion.

Something I loved (besides the blood and gore) was the camera work, there were several interesting shots that increased the tension of the moment and plunged me even deeper. At no moment was used that hateful shaky hand held shots and you could always see clearly what was going on, even on the action scenes. THANK YOU!

The acting for the most part was good, and although there were some times where the performance felt flat, it was nothing that could pull me out of the film. I found the characters very believable, since none of them was an retired soldier, or martial arts expert, just average people that we might meet at random, some more prone to panic than others, but mostly centered and with the will to survive. Yes, bad decisions are made here and there, but nobody is a complete moron.

The story and the way it was presented made me feel I was seeing an adaptation of an earlier story written by Stephen King, where all the characters are potential corpses, without regards of gender, race or age. Kitamura and Joey O’Bryan brought a story that kept me tense most of the time, and I had fun tryng to guess which of the characters will make it alive at the end. I really hope to see more collaborations between Kitamura and O’Bryan in the future.

The film has several scenes with explicit violence, blood and gore, but in my opinion, none of that was gratuitous or just for shock value. The special effects, most of them practical as far I could tell, were very effective and memorable. The music by Aldo Shllaku was also very effective, and increased the tension on several scenes.

In conclusion: «Downrange» is a very good film that looks great all the time, and the plot manages to balance suspense, action and gore. We could debate that it lacked some character development, but with a running time below the 90 minutes mark, it kept me on the edge of my seat and entertained, therefore I will add this title to my collection when it get released on Bluray.