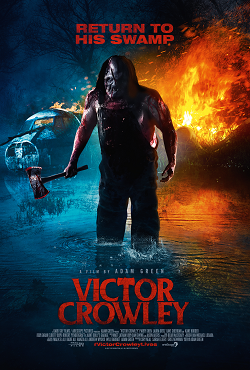 This film was in my opinion, made completely for the fans of the Hatchet saga and other Adam Green’s works, if you didn’t like the previous Hatchet films, this entry will not bring anything to change your mind. However, if you are a fan of the saga, I’m sure you will have a blast. In case that you also enjoy the show «Holliston» or if you listen «The Movie Crypt » podcast (both created by Adam Green with Joe Lynch, the director of «Wrong Turn 2» and the more recent «Mayhem») you will find A LOT of references and in-jokes that will go unnoticed by the casual viewer. In case you still haven’t figured out, I will disclose that I am a huge Green’s fan, so take my opinion with a grain of salt.

This new entry is more inclined to the comedy and from the start it let us know that is not meant to be taken seriously. Some acting is way over the top, there are some jokes that drag for too long and don’t really pay off, but still, there are several others that work great. If you are a fan of Troma films, you will be in good shape. The film also plays with your expectations and trows a couple of curve balls when dealing with the cliches of the slasher genre in order to keep us wondering which characters will survive Crowley’s murdering rage…. IF there are any survivors, of course.

Something that is kind of iconic on these films is the kill sets, and following suit, most of the kills on this film are very well done and others are incredibly exaggerated, so is normal to sometimes being confused if you should scream or laugh (when in doubt do both). The special effects, most of them practical, (I am by no means a CGI detection expert) at moments are very well done, but there are others clearly made to make you laugh.

In conclusion: I though the original Hatchet trilogy had a strong finale, so at a simple glance «Victor Crowley» may seems like a sequel that we did not need, BUT I loved the fact that it was made, and I would gladly watch any sequels that may follow. I won’t give any spoilers, but I recommend you to stick around when the ending credits start to roll.

«Victor Crowley» was written and directed by Adam Green («Hatchet» 1 y 2, «Frozen», «Digging Up The Marrow») and has the performances of Kane Hodder (Who played Jason Vorhees in the Friday 13th films from 7 to 10) reprising his role as the terryfying Victor Crowley, Parry Shen ( «Hatchet» 1-3, «Better Luck Tomorrow»), Laura Ortiz (the remake of «The Hills Have Eyes», «Holliston» ), Dave Sheridan («Scary Movie»), Felissa Rose (Angela in the cult classic «Sleepaway Camp») and Brian Quinn (truTV’s «Impractical Jokers») among other.

The film is already available on VOD and Bluray.