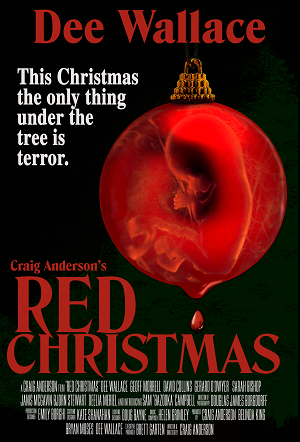 After being thrown out from the house, the mysterious stranger decides to return and exact vengeance on the mother that to his eyes abandoned him and the family that till this day was not even aware of his existence, all this resulting in a very original film with suspense, violence and gore, that kept me wondering if it was meant to be seen as a parody of the slasher genre and its clichés, or as a serious film that just happens to use a very dark Pro Life/Pro Choice twist. At any rate, the story works very well, and brings us healthy amounts of blood and gore, a fast, steady pace, and interesting characters for us to guess if they will survive the fury of this peculiar executioner or not .

Ok, from the start I’ll say that «Red Christmas» has a lot of good things in its favor, and while some people might argue that the origin of «Cletus» (the killer in this movie) is too far fetched, I’ll point out that both Freddy Krueger and Jason Voorhees have also a very peculiar origin story (Let’s not even get into how they are brought back in every sequel) therefore I had no trouble with Cletus or his story. The pacing of the film is steady and does not waste time with pointless overstretched scenes. The plot manages to keep us interested, although there are also moments where some characters put our patience to the test doing very dumb things. 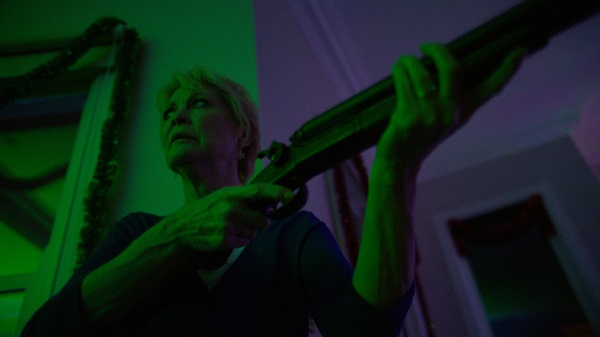 Although some characters can be considered stereotypes for a slasher and they are clearly there just to increase the film’s body count, there are some other characters that are memorable. For instance I found Jerry’s character (The son with Down Syndrome) very well done, without being cartoonish or exaggerated, and at no moment was he used as a sentimental blackmail (and it actually has a great moment on the third act). There are some good special effects on the movie, but there also some effects that might cause some chuckles (and I am sure that it was not intentional). I found the acting very good for the most part, specially for veteran Dee Wallace as the head of the family, however there were some other performances that are just fine.

One of my problems with the film, however, is the overuse of what I call the «Drunken Camera shots». There were moments we can barely understand what is going on, and although some are scenes that tries to show the horror and desperation of some characters, I feel there was no need for the camera to be constantly shaken just «To make it more realistic», since that is something that actually TAKES ME OUT from the movie. Every time somebody tells me that those shots are «to make you feel you are there», I like to bring «Mad Max Fury Road» as a counterclaim, it is a great film with tons of action that effortlessly pulls you into the plot, and as far I can remember, there was not a single scene that the camera seemed to be operated by a drunken monkey. Unfortunately many new directors take the «Artistic decision» to not use a tripod in their films (Specially on the horror and thriller genre), and although I understand that some scenes can be benefited from this technique, I feel that when is used several times in the movie «to make it look more real» it does not help the film, it actually hurts it.

Leaving my ranting aside and going back to «Red Christmas», I think is safe to say that this film is more oriented for the lovers of the genre and not so much for the public in general, or the casual viewer. I think the movie deserves to be watched a couple of times, since it knows what kind of story is telling and it makes it work. Does it needs a sequel?. Probably not, but is my impression that just as the director Craig Anderson managed to bring a new proposal to the slasher genre with Cletus, it could also bring something new to the table in other subgenres, so I suggest we keep an eye out for his next project.

I just hope he does not turn to the Zombie genre, but to the  “Creatures Features” instead, or to another holiday themed horror film, that might be interesting.