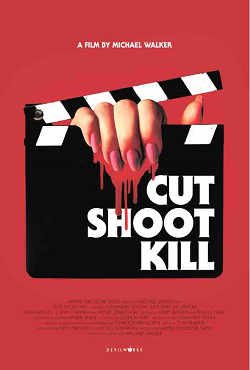 Ok, that is all you need to know about «Cut Shoot Kill», now go and watch it.
As in NOW.

Some people might think that I have spoiled the movie, but they would be wrong, as simple as the plot sounds, I’ve described just the tip of the iceberg, and the film have more plot and surprises for those brave enough to see it.

The pacing of the film is good and steady, and even when you can guess the dark intentions on the film crew, the story keeps you entertained, and you can have some fun trying to guess which character will bite the dust next. Although at times the acting can feel exaggerated, it works very well for both the main story, and the film that is being created within.

The special effects, most of them practical, are very good, and I would like to point out that the film has very nice camera work too, I can’t recall any shots done with the dreaded «shaky cam» style, and if there were, they couldn’t be long enough to become annoying.

In conclusion: I really had fun with the film, it has some good kills, is well paced and it has a deeper story that one might think. It never takes itself too seriously, is not a homage to nothing, is not a parody, Is just a goddamn good slasher film, and therefore I highly recommend it.