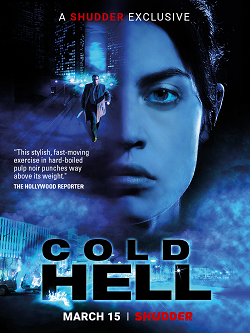 On «Cold Hell» (Die Hölle) we meet Özge, an immigrant working in Vienna as a taxi driver. Besides dealing with the troubles that come with the job (drunken passengers, harassment and A-holes drivers), Özge also struggles to keep her sanity: Her family is practically non existent, her cousin/best friend constantly uses her as an alibi so she can keep cheating on her husband, and due a (justified) moment of rage she is expelled from the sport club where she practices Thai Boxing. To make matters worse, one night coming home she accidentally witnesses a brutal murder, and while she can’t clearly see the face of the murderer, she knows he had a good look at her.

Despite being a key witness in the crime that was committed, the detective in charge of the case pretty much dismisses Özge’s testimony, apparently due her being a immigrant with a previous criminal record. Knowing that her life is in danger and the killer won’t rest until she is forever silenced, Özge decides to deal with him on her own, and on her terms, since neither the police or her family seems to be able to help her (or even want to).

There are several things that I liked about «Cold Hell», but the first thing that comes to mind is the characters and how they were masterfully developed, Özge is not the typical victimized female character that spends most of the movie frightened and confronts her attacker only in the last act of the movie, nor is the butchy-type girl that some times is presented as «a strong empowered woman» in films. Özge is a character that quickly show us she is strong and willing to make her way through life by taking and delivering punches, but also a woman capable of showing compassion when she needs to, with a vulnerable side visible only to the person that deserves to see it. Very effectively it is explained why Özge is the person we see on the screen and without using any emotional blackmail we are drawn to her side, thus rooting for her victory in the end.

Another nice surprise was the detective Stenier’s character. At first we may dismiss him as the usual insensitive jerk policeman that couldn’t care less about Özge’s troubles, or even expect him to be a constant obstacle for her instead of protecting her from the killer. After we get to know him better, we can see he is not some grumpy cartoonish detective, but an actual caring person, that little by little truly starts to care for Özge and her niece, that for some circumstances that I wont spoil, ends up under her care.

Although I would call this movie a thriller with some Giallo elements, there are several amazing and long action sequences, thus is understandable that many people will call this a revenge-themed action film. Without being preachy, the film brings to the table some reflections on the discrimination to immigrants, the indifference towards Muslim people that have become a crime victim (and not portrayed as just a stereotype), the strong hold that some family traditions still have on some people today, and the refusal to question the father as an authority figure. Of course there is also the theme of femicide and violence towards women (not to mention that some times the female characters are seen by others as inferior for no real reason whatsoever) but what surprised me the most was how all this themes were cleverly balanced and shown in a way that is impossible not to see them, but never felt heavy nor took me out of the story, stopping me from enjoying it.

A lot of the weight of the plot rested on Violetta Schurawlow performance as Özge, and I think she did a great job. Her chemistry with Tobias Moretti (Detective Steiner) also helped the story to move very fast and made me like their characters even more. Another thing that I found interesting were the motives of the killer and his philosophy, because that and the twist done by this film on the whole «Cat and mouse» plot, made the story stand out from other thrillers.

The film has a very fast pace and never feels tired. This is a movie that I would recommend to those that like well-written strong female characters, fans of the great action/revenge films (Specially from the 80’s), and those who want to enjoy a great film that is not a remake, is not cashing on nostalgia or relies on cheap emotional blackmail.

The film was directed by Stefan Ruzowitzky (The Counterfeiters , The Inheritors ) written by Martin Ambrosch (Tatort, Traces of Evil) and has Violetta Schurawlow, Tobias Moretti, Sammy Sheik, Friedrich von Thun and Robert Palfrader in the cast.

«Cold Hell» will debut in exclusively on the SHUDDER streaming service, on March 15th, 2018.